Beta launches the new Evo My 2020 on the market.
Beginning with extensive development and technical refinement work carried out by Beta engineers at their Tuscany base last year, resulting in the production of an engine which provides even better performance and reliability, the new Evo My 2020 represents a further evolution, especially in terms of design and ergonomics.

With experience gained over the years spent on race tracks, this year’s Beta Factory Team made up of James Dabill and Benoit Bincaz was able to transfer all that technological know-how to the new Trial range, so that both amateurs and professionals could get access to highly-evolved bike technology

The 2-stroke version is available in four different engine sizes: 125, 250, 300 & 300 SS where “SS” stands for “Super Smooth”, a bike with a smoother character compared to the standard version.

Chassis
Much attention has been paid to the chassis design. In fact, the look of the Evo My 2020 has been completely revised, making it an even more attractive bike.
Here are some of the details:

On all 2 & 4-stroke engines, including the 300 SS, we have revised and optimized the engine timing advance curves in order to improve engine responsiveness and make the bike easier to ride at any revs. The engine obviously retains all the major updates it received in 2019, i.e. cylinder with new exhaust port geometry and new timing charts (2-stroke, except 125), gearstopper cam (2-stroke), new CDI control unit (2 & 4-stroke) and new throttle (4-stroke).

No offers currently available for this model 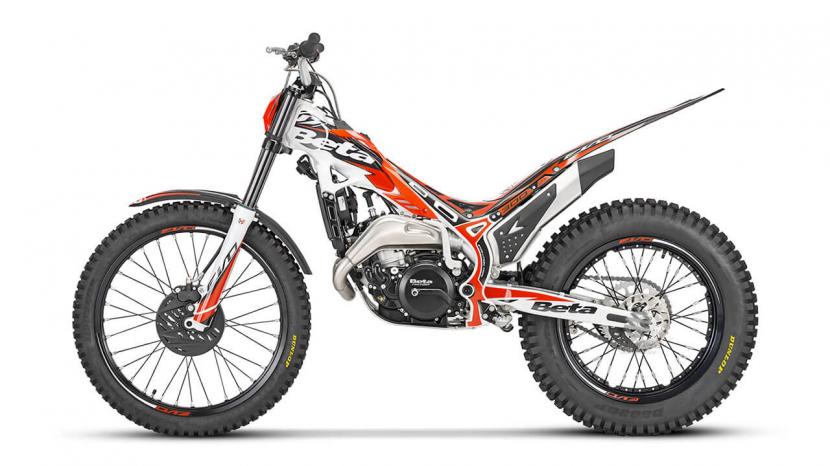 In order to reserve this Beta EVO 2T, you can place a fully refundable deposit of £99. Simply click on the the button below to proceed via a secure, one time and fully refundable payment of £99.